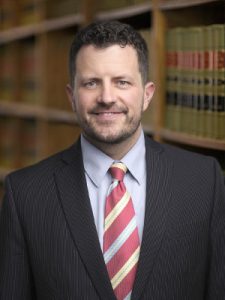 Prior to joining Dudley and Smith Eric spent more than a decade owning and operating his own solo practice. He understands the role a legal matter plays in the lives of his clients and the need to approach each case as the major event it is in the client’s life. In 2018 Eric was recognized as a Rising Star by Super Lawyers, an award received through nomination by his peers, and a designation only 2.5% of attorneys ever receive. In 2014 Eric was selected as a Minnesota Lawyer Attorney of the Year, joining the ranks of the best attorneys in the state. This distinguished honor is given to attorneys in recognition of their excellent work and public service.

Eric earned his undergraduate degree, an Honor’s Degree is Spanish from the University of Utah in 2004. He has spent time living in Spain and Honduras, and is fluent in Spanish. In his free time Eric enjoys spending time in nature with his children, and volunteering in his community.